January – What’s on at the Beer Merchants Tap 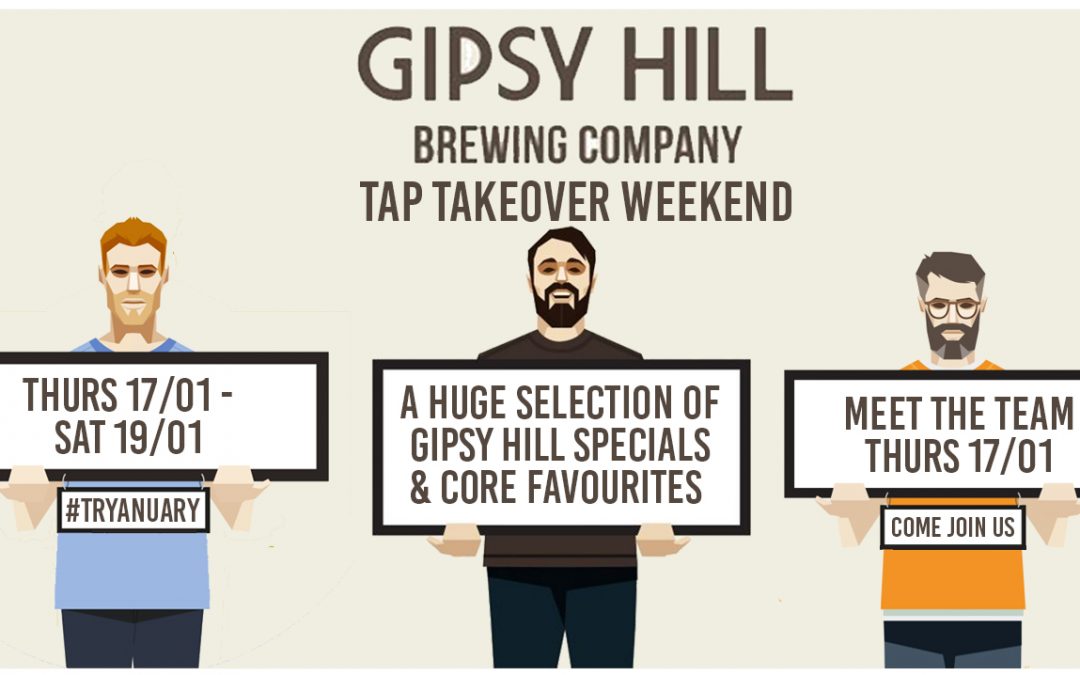 It’s the start of another bright new year. If, however, you think the beer industry is taking a breather, well you are dead wrong! Beer never sleeps, people! It’s Tryanuary after all!

We’re starting 2019 as we intend to go on – celebrating great beer. We’re also celebrating those souls who toil over their mash tuns every day. We’ve got two great Tap Takeover Weekends lined up as part of this years Tryanuary. Many customers choose to turn their back on bars and pubs at the beginning of the New Year in an effort to shave off all those mince pies pounds. With Tryanuary the beer and hospitality industry encourages people to be more selective with their drinking as opposed to abstaining completely.

With our first Tryanuary Tap Takeover weekend, from Thursday 17th to Saturday 19th January, we will be championing one of our local favourites, Gipsy Hill Brewery. This South London brewery has gone from strength to strength in recent years. They’ve added a diverse selection of special beers to its extremely popular core range. With their extremely recognisable graphics the Gipsy Hill 440ml special cans are becoming more and more available across London and beyond. Joining us on launch night will be the whole Gipsy Hill team, including owners & brewers Sam & Charlie.

Our next Tryanuary Tap Takeover weekend will be from Thursday 31st Jan to Saturday 2nd Feb (just squeezed it in there). We’ll be celebrating not one, not two but three British breweries that we believe are set to take 2019 by storm. Verdant brewery, from Falmouth in Cornwall, really don’t need an introduction. They are the creators of some of the finest hoppy pales, juiciest New England IPAs and stunningly rich Imperial stouts in the UK. Since pairing up with Pressure Drop to open The Experiment in Hackney, Verdant have run an extremely successful Crowdfunder. These guys will be moving to the next level once their new brewery opens. Alongside Verdant we are very happy to be hosting Suffolk’s own Burnt Mill Brewery. Focused on producing fresh, unfiltered beer, head brewer Sophie De Ronde has been turning heads with her perfectly balanced beers.

Finally to round off the Triple Whammy we’ll be hosting Left Handed Giant, one of Bristol’s top breweries in a city of amazing breweries. Also fresh from a successful crowd funding campaign LHG are poised to expand their operation into a brand new restaurant, bar and event space venue. The existing brewery will become a mixed fermentation specific facility with a coolship and an extended barrel and foudre store. Damn yes. We will have four to six kegs from each brewery across the weekend so come and get your fill!

What beer education events have we got going on this Tryanuary?

Quite a lot actually. We’re going to be launching a series of educational events, tastings and training days. These will be open to all and will be focused on furthering beer knowledge, tasting & judging experience and even hands on amateur brewing experience (more on that later on this month).

First up we’ll be hosting the Cicerone training courses once more on Saturday 19th January (Off flavour training) and Sunday 20th January (BeerSavvy Bootcamp). Cicerone is a world recognised beer qualification. Beer Merchants has a number of Cicerone trained staff. There are still places available so get your tickets here.

How about Beer Judging?

We will also be launching a monthly BJCP (Beer Judge Certification Program) Beer Training course. The BJCP gives clear style guidelines and indications on aroma, flavour, appearance & mouthfeel for each beer style. It is a much loved tool of every home brewer. It’s becoming increasingly used as a resource by professionals in the beer industry to increase their beer knowledge and educate palates. This month we will be kicking off proceedings with American Dark Beers (including American Amber, Brown, Porter and Stouts). These events will be ticketed and limited in number. They will include training not just on each particular style but also on more generic beer tasting and judging. Where possible we will be tasting commercial and home brewed examples side by side. Each participant will be encouraged to judge and score beers one or two beers during each session.

The course will run the length of 2019, and the goal will be to encourage as many attendees as possible to join the BJCP, sit the Tasting Exam and join the fast growing pool of amateur UK beer judges. Our very own resident beer dork, Pips, will be leading the course. Pips is founder and director of Brew Con, the UKs first and only home brewing conference and expo and he is pretty obsessed about beer so you’re in good hands.

We’re very excited to bring all these events to you, but just in case that wasn’t enough to sate your appetite then don’t worry there is more…

Beer Merchants resident Yorkshireman, Jack, is bringing his widely successful beer & cheese pairing night to the Tap. Join Jack once a month as he explores the wonderful world of cheese, enhanced by our favourite beverage. Tickets are only £12.50 and include four beer & cheese pairings on the night. Grab your tickets here.

We’re very happy to announce that we have partnered with Foodism Magazine. We’re launching a brand new monthly tasting evening ‘Hop Culture’ on the first Tuesday of every month. This evening will focus on the very freshest, most hyped beers out there. Each session will include six tutored tastings led by Pips and the Foodism team. More info here.

and one more bonus event?

Finally, for something a little bit different, we’re teaming up with some of our favourite beer journalists, writers and photographers to launch a monthly Photography exhibition night, aptly named ‘#Beertography’ (yes including the hashtag). We’re honoured that to kick off proceedings the lovely and talented Theresa Undine will be showcasing some of her best work. All the artwork will be available to buy on the night. Come join us for a slightly more high brow beery evening. You’ll have the chance to snap up the perfect piece to go above the mantelpiece.

See you later on this month, team.