Want to learn more about design work within the beer industry? Nanna Guldbæk is Lervig Brewery’s very talented designer and decorated The Beer Merchants Tap with our amazing mural. She will be in house on Friday 4th May from 7pm and is bringing a host of amazing Lervig beer & goodies with her. Meet Nanna in the main bar and have a look at some of her creations. We hope to have some for sale, alongside a whole host of Lervig merchandise.

Lervig is an independently owned and operated craft brewery located in Stavanger Norway. They produce a wide range of beers from easy-drinking pilsners and pale ales, barrel-aged barley wines and sour beers. They are constantly pushing the boundaries of brewing consequently improving beer for both everyday people and craft beer lovers alike. Their goals are to brew the best beers in the world and it seems like they are making good ground. Today Lervig is focused on growth most of all pushing the creative limits of brewing while making sure they have a healthy supply of refreshing beers to ship throughout Norway and beyond.

Salty Loins will be in house all weekend and for the Lervig TTO they are cooking up a special ‘Lervig 10.5% Imperial Stout Gravy’

EXTRA SPECIAL ADDITION TO THE LERVIG LINE UP!

DIPA 8% 11 EBC 35 IBU
A base grist of Pils malt, oats and dextrose gave a hefty 8% ABV which was followed up with three big doses of Citra, Ekuanot and Enigma. Fermentations was with a classic ale strain. The beer is fruity and punchy – think ripe mango, citrus and peaches with a kick.

This beer is not on general release until 14/05 so be one of the first to try it anywhere in the world!

Find out more about the brewery here – Lervig Dot Com 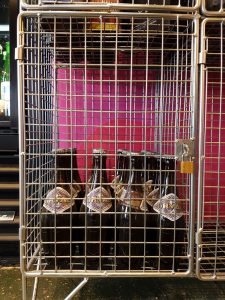