Every month at the Tap we pick a theme that informs the beers, the vibes, the cheese, the meat, even the crisps. Last month it was Ireland, specifically the White Hag, as they launched their Guinness-killing nitro stout.

Well this month it’s the turn of the UK’s best and more innovative mixed fermentation brewery, Wild Beer Co! It’s hard to explain the impact this brewery has had on the UK, making sour and brett beers long before even the nerdy market truly understood and appreciated it. Next to our other Good Company brewery, Burning Sky, they still lead the market in mixed fermentation beers, making what should be challenging brewing and indeed drinking as easy and delicious as can be.

We have a whole host of events lined up for April to celebrate the awesome beers Wild make, starting with a meet the brewer and takeover on the 5th April (with lots of delicious stuff on tap and in bottle) and climaxing with a HUIS PARTY on the 26th when we launch Wild Beer’s iteration of our house beer, Huis.

Join us for a Wild Beer takeover, meet the brewers behind the beers and try your hand at beer, cheese and meat matching. The taps will be pouring from 6pm, with some exclusive rarities on the list to be announced.

Come to an intimate beer and cheese night in our candlelit backroom, where a Wild Beer brewer and cheese expert will take your through four amazing matches before heading out into the main bar to continue ploughing through the mixed ferm deliciousness. All the beer and cheese from the tasting is included in the price and details will be released very soon.

Wild Beer have sent us some amazing stuff from their ageing cellar – including kegs of Yadokai, Modus and Wildebeest vintages – as well as a 50l oak cask of Modus that we’ll pop on the bar and pour directly from. On top of that we’ll have the greatest of the Wild Beer Co mixed ferm range in the fridges to drink in and takeaway.

On 26th March we headed out to Somerset to brew the next version of our house beer, Huis, at Wild Beer Co. The beer is a collaboration with between us, Wild, Duration and Burning Sky and although it always comes in the form of a Belgian pale ale, the recipe changes with each brewery who makes it. The first edition at Burning Sky was all malt, noble hops and grains of paradise with Ardennes yeast. This time we made it with coriander, wheat and a red wine yeast to add more fruit and spice in the vein of a witbier. We’ll unleash the beer on the 27th April side by side with the first version and lots more exciting beer from the three breweries involved. 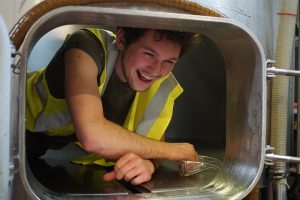